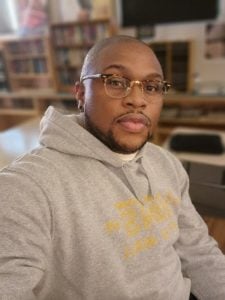 After dropping out of high school, Nashid Atkins earned a GED (General Education Development) diploma. Now, he is the first person in his immediate family to hold a master’s degree. Times two.

“I work in special education, so I got a master’s degree in that area,” he said. “I wanted to open up my horizons even more, so I went back to school for another one. I love being in the classroom.”

“I heard that Emporia State is one of the teacher colleges here in Kansas,” he said. “I wanted to make sure that I was getting some valuable information and education through them, which I did. I knew they had expertise in working with teachers.”

Atkins is in his fifth year as an educator at Sowers Alternative High School, but he has worked for the same school district, Wichita Public Schools, since 2012. He was a veteran online student when he enrolled at ESU.

“Earning a master’s degree online was very manageable,” he said. “It wasn’t overwhelming, and it kept me busy throughout the year-and-a-half I was in the program.

“It’s important to understand that the program is flexible and works around your schedule. Also, it’s valuable for our work in education. Especially if you’re looking to switch positions within your school, it’s something I would recommend.”

Once Atkins completed his GED in his hometown of Wichita, he made his first foray into higher education while still seeking a career path to pursue.

“I went to college and thought about going into communications,” he said. “Then, a para-educator position opened up that I accepted. Coming in and being able to communicate with the students and make an impact on their lives made me want to teach.”

Atkins graduated with a bachelor’s degree in secondary English education at Wichita State University in 2017. Two years later, he added the first master’s degree he earned online from Southwestern College in special education, then enrolled at ESU the following year. Atkins quickly applied the skills he was gaining in the program to his job, particularly with increased leadership responsibilities at work.

In addition to bringing what he has learned to his classroom, Atkins is applying his knowledge to volunteer work. He provides professional development for GLSEN, a program that promotes safe spaces for all students in the school district, allowing for open dialogue and embracing diversity.

“I especially enjoyed the Education Leadership Theory course in the master’s program at ESU,” he said. “I was able to home in on my leadership skills and think critically on meaningful topics pertaining to equity and equality.”

With a second master’s degree under his belt, Atkins hopes to transition to a new role in his career as a teacher leader.

“I want to still work in the classroom, help teachers and be a good go-to point,” he said.

While spending the majority of the last seven years pursuing advanced degrees, Atkins had a strong support system in place with his family and friends encouraging him.

“Some of them weren’t surprised I went back for another master’s degree because I’ve been in school for so long, but I am done now,” he said.

Atkins, who recently bought a house, believes the degree he earned from ESU will help him achieve his career goals because it complements his real-world experience.

“The master’s degree will help open up career opportunities for me,” he said. “I’ve garnered so much knowledge out of the program. I would definitely recommend it to other educators.”

How’s that for a comeback story?

Become a Leader in Curriculum Design
Educators looking to advance their careers and apply their passion for education in leadership roles may want to explore a program like a Master of…
Read more
The Future of Education and Beyond at ESU
Education is always an evolving field, but it experienced an unprecedented rate of change in 2020. No one would claim the educational shifts wrought by…
Read more
Improve Critical Thinking in Your Students with an MS in Curriculum & Instruction
More and more educational products and services have turned their focus to training “critical thinkers.” While critical thinking is a desirable trait in a classroom…
Read more
Kaleigh Kear Makes Most of Second Chance at ESU
Kansas local Kaleigh Kear encountered more than a few obstacles when she enrolled in a master’s degree program the first time. “My husband (Cole) and…
Read more
Teaching Strategies to Accommodate the Learning Styles of Diverse Students
Educators know that every student has their own unique identity. This includes not only their outward behavior and personality, but implicit traits as well, such…
Read more
ESU Alumni Hannah Carlson Finds Balance in Master's Program
Little did Hannah Carlson know that grading papers for her teachers as a high school student was a foreshadowing of her career as an educator.…
Read more
What Is an Instructional Coach?
Many educators may not know what an instructional coach is, let alone whether they want to be one. A name like an instructional coach is…
Read more
Why Is Evidence-Based Practice Essential for Innovative Curriculum and Instruction Leadership?
The processes of building lessons, establishing classroom practices, and developing other instructional plans are significant responsibilities for any educator. There are many variables to account…
Read more
Have a question or concern about this article? Please contact us.

Articles that appear on this website are for information purposes only. The nature of the information in all of the articles is intended to provide accurate and authoritative information in regard to the subject matter covered.

The information contained within this site has been sourced and presented with reasonable care. If there are errors, please contact us by completing the form below.

Timeliness: Note that most articles published on this website remain on the website indefinitely. Only those articles that have been published within the most recent months may be considered timely. We do not remove articles regardless of the date of publication, as many, but not all, of our earlier articles may still have important relevance to some of our visitors. Use appropriate caution in acting on the information of any article.

Ready to get started?