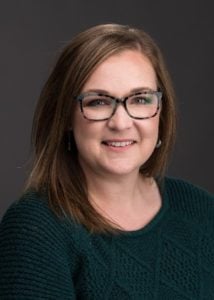 Dorothy Stevenson didn’t find her true calling. It found her.

“I had been working at an agency, CrossWinds Counseling & Wellness, for eight years,” she said. “The agency was in business for 50 years without a marketing team.”

At her CEO’s behest, she and a co-worker took charge of that aspect of agency operations.

“After that, I realized that I love marketing,” she said.

That twist of fate also led Stevenson to enroll in the online Master of Business Administration with a Marketing Concentration program at Emporia State University. She graduated in May 2020.

“I absorbed everything I could on the job, but there was still that piece of me that thought, ‘I am the only one around here who doesn’t have a master’s degree. Everybody else has a graduate degree associated with mental health,'” she said. “I didn’t want to do that. I wanted to continue doing marketing.”

Stevenson, who graduated with a bachelor’s degree in sociology from Emporia State 13 years earlier, did not realize that her alma mater offered an MBA in Marketing until she Googled it.

“It was the first thing that came up,” she said. “I got some more information. Then, I got a call. It was so easy. I applied and paid my fee before I told my husband, Josh, about it. He was super supportive.”

After working in a graduate student position and completing the program, Stevenson became the director of marketing, media and public relations for the College of Liberal Arts and Sciences at Emporia State University.

“I love the place,” she said. “I can’t get enough of it. It was wonderful to be able to learn at my own pace, around my own schedule in an accelerated format.”

Stevenson, 35, is from Gardner, Kansas. After graduating from Emporia State in 2007, she planned on a career in criminal justice. Instead, she went to work for CrossWinds Counseling & Wellness in Emporia.

“I had never considered marketing,” she said. “When I had a conversation with my CEO, I didn’t know if it was something I wanted to do. I ended up running a marketing program for four years.”

The online format of the MBA in Marketing program was especially important to Stevenson because she and her husband have two children — Cole (8) and Mia (6) — who play competitive sports.

“When I was considering online classes, I didn’t want to spend a lot of time outside of what I already had planned with my family,” she said. “Being able to do it whenever I wanted — weekends, evenings — was great.

“My husband would take the kids and find something for them to do when I needed some time to work on school. It was easier for me to study after they went to bed, as opposed to being in a classroom.”

Especially because her undergraduate degree was in a different area, Stevenson gained valuable knowledge in the online MBA in Marketing program. She especially enjoyed the Marketing Analytics course.

“I benefited from how much I learned — especially in the marketing classes,” she said. “It was valuable to learn in that type of environment, and then take it to a career and know how to do it. It made me more valuable in the workforce.”

Stevenson is the first person in her immediate family to earn a college degree. Her father, Rob Jochem, was especially proud of her accomplishment.

“My dad was the most supportive,” she said. “Being the first person in my family to get an undergraduate degree was a big deal. When I talked to my dad about getting a master’s degree, he was so excited. I didn’t know it meant that much to him.”

Although Stevenson is relishing her new role, she hopes to someday take the next step in her second career with her master’s degree.

“I would like to move up the ladder in marketing,” she said. “I got my feet wet in the graduate school position, but I would like to be a chief marketing officer at some point.”

Stevenson is glad that she returned to Emporia State for a master’s degree.

“Some of the accounting and managerial courses were tough because my undergrad wasn’t in business, but they were still doable,” she said. “I finished with a 3.72 GPA.

“I would tell anybody considering this program to just do it. Jump in, and go for it. It’s going to be so worth it when you finish.”

6 Hot Trends in Marketing for 2019
New trends in marketing are emerging rapidly thanks to advances in technology. A master’s degree in business and marketing, like Emporia State University’s online MBA…
Read more
An MBA for Marketing Professionals
Ready for a raise and better job opportunities? A Master of Business Administration (MBA) in marketing can be a great way to get there. Emporia…
Read more
What Does a Brand Manager Do?
Ever had the overwhelming urge to buy a Big Mac, an iPhone or a new Toyota, even if you didn’t need one? If the answer…
Read more
Why Earn an MBA in Marketing Online?
Few fields are as dynamic, fast-paced and challenging as marketing. Professionals in the field are directly responsible for driving revenue, increasing market share, and generating…
Read more
Have a question or concern about this article? Please contact us.

Articles that appear on this website are for information purposes only. The nature of the information in all of the articles is intended to provide accurate and authoritative information in regard to the subject matter covered.

The information contained within this site has been sourced and presented with reasonable care. If there are errors, please contact us by completing the form below.

Timeliness: Note that most articles published on this website remain on the website indefinitely. Only those articles that have been published within the most recent months may be considered timely. We do not remove articles regardless of the date of publication, as many, but not all, of our earlier articles may still have important relevance to some of our visitors. Use appropriate caution in acting on the information of any article.

Ready to get started?